The Rake’s Progress at Pittsburgh Opera

“Jill Grove’s rich-hued Baba the Turk…Grove’s Baba the Turk had all the temperament to make the bearded lady’s tirades and dish-throwing the focus of her major scene. Her voice was large and powerful, yet capable of tenderer colors when she relented later on, giving advice about love to the devastated Anne. Her stage savvy could have served as a role model…”

“Jill Grove played Baba the Turk – the bearded lady at a glimpse of whom brave warriors swooned – with relish and braggadocio. She manipulated her voluminous deep mezzo-soprano for comic effect, adjusting her vocal coloration to affect sympathy when giving advice to the disconsolate Anne.”

“Jill Grove was fabulous as Baba the Turk, the bearded lady Shadow suggests Rakewell marry. She commanded the stage physically and sang with flamboyance just right for her character. Grove was comically superb in the scene where Anne Truelove discovers her old boyfriend has married someone else.”

Hansel and Gretel at the Lyric Opera of Chicago

“Etching her second memorable villainess at Lyric Opera this fall following her Klytemnestra in Elektra, Jill Grove was a high-energy hoot as the Witch. Singing with her big mezzo, clambering up her high kitchen table, menacing the kids, or uninhibitedly dancing with anticipation as she dreams of baking the children into pastries, Grove provided the most enjoyable and sheerly theatrical moments of a rather downbeat show.”

“They then see the witch’s house and they are lured in by the wicked witch, played with zest by mezzo-soprano Jill Grove as a Julia Childs type gone mad. Grove is fabulous as the crazy witch determined to fatten up Hansel before turning him into a gingerbread child. She sings the “Hoop, hoop, hoop” in a manic flamboyant performance.  I was thrilled by the darkly comic work by Jill Grove as the manic witch.”

“Mezzo-soprano Jill Grove is vocally magnificent as the witch, a wicked satire of Julia Child who whips up food in a frenzy to a culinary free-for-all with the children before getting her due.”

“An unforgettable Jill Grove (witch) is a nimble sorceress.  An impressive Grove sings beautifully while trashing the stage and climbing on furniture.”

“The role of the sisters’ mother, Klytaemnestra, is played by mezzo-soprano Jill Grove who makes it very easy to dislike her character with her strong performance as the villain in “Elektra.” She plays bad so good. She, like Goerke, delivers on the acting in addition to the singing. You don’t have to read the subtitles to know her role in the story. Her body, her voice and everything in between give you the entire context to understand.”

“Mezzo-soprano Jill Grove, also making her MOT debut, delivered a Klytemnestra with chilling impact. Her rich, dark voice was fraught with fear. She’s tormented by horrific dreams that Oreste will return and is mistrustful of Elektra. In many ways she’s more emotionally fragile than Elektra. Grove played her part as a woman on the brink of a psychological breakdown, and her duet with Goerke was strung with edgy tension.”

Elektra at the Lyric Opera of Chicago

“Lyric has assembled a fine supporting cast, led by the chilling Klytaemnestra of mezzo-soprano Jill Grove. Bald-headed and costumed grotesquely with heavily bejeweled bosom and pleated gold skirt, Grove makes her character seem to reek of moral decay as she recounts her unrelenting nightmares. She brings prodigious power to her disconnected utterances – set to some of Strauss’ most daringly dissonant music – and her very lowest notes in particular are crushing in their brutal force.”

“Taking on the role of the mother from hell is American mezzo-soprano Jill Grove, doing splendidly by music she actually sings rather than screams in the time-dishonored Klytemnestra tradition. Macfarlane has made her up as a bald-pated battle ax in a ludicrously oversized bustle who must support her bloated frame on a staff. Grove attacks her music and stage business with cackling gusto.”

“Grove’s Klytämnestra, a sci-fi-looking creature with bald head and impossibly buxom torso, was equally vivid. Tormented by wild dreams, turning to Elektra for magic rituals to soothe her fears, her Klytämnestra revealed a convincing vulnerability beneath her harsh surface.”

“Arguably, the Calgary Philharmonic can attribute the divine performance to the strength of its mezzo-soprano… American Jill Grove was clearly in her element as she navigated Verdi’s challenging writing. From her opening notes in the “Christe eleison” to her final notes in the Lux aeterna, Grove’s voice is meant to sing this work. Her rich, expressive voice reverberated into the hall with a sense of calm that set the tone for the entire performance. Her higher tessitura, as evidenced in the “Liber scriptus” movement, was especially pleasant with roundness and vibrancy that she carried seamlessly into her lower-middle register.”

“She was ably partnered by mezzo-soprano Jill Grove, the difficult octave writing in the Agnus Dei happily in-tune and expressive. Grove has just the right vocal weight and timbre for her part, one that vocally is not far removed from the battle-axe roles Verdi gives the mezzo-soprano roles in some of his operas. This type of vocal writing requires unusual vocal strength, especially in the upper register, and full projection at the bottom of the voice. All these things were powerfully present in this fine performance, a memorable performance in all respects.” 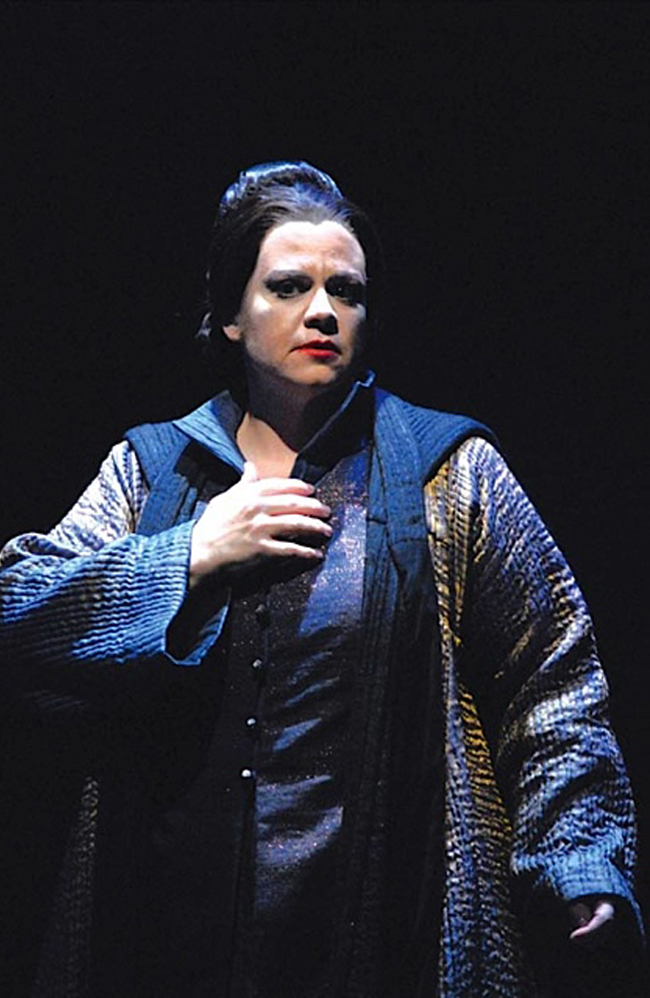 Die Frau ohne Schatten at the Lyric Opera of Chicago

“I have never heard the Nurse’s music [Die Frau ohne Schatten], which requires the near impossible, a contralto-cum-dramatic soprano, better sung than by Jill Grove.”

“Other standouts among the large and varied cast included Jill Grove, who lent radiance and pathos to her brief cameo as a grandmother sacrificing her all for the cause…”

“Jill Grove was a forceful, no-holds-barred Auntie with a full-bodied chest voice wedded to a lower- and upper-middle that rang out in the house. In addition to a superior technique, Ms. Grove also sported the best diction I have ever heard from anyone in this part. Ileana and Jill were also stellar in one of the evening’s highlights, as their voices effortlessly intertwined in the famous quartet.”

“Jill Grove, a powerful Amneris a couple of years ago, gave a colourful portrayal of Auntie, with a voice as powerful as her presence.”

“Mezzo-soprano Jill Grove’s Ježibaba—peasant-like, kerchiefed, and cackling—was the embodiment of a fairy-tale witch, and she had the extreme range, from thrilling highs to thick, powerful lows, for the comic-terrifying role. “

“Jill Grove’s commanding Jezibaba is a hoot, the blustery babushka of a witch who effects Rusalka’s fateful transformation at a terrible price. She snaps and snarls each note and syllable, investing every one with sass, bite and wry humor.”

Rusalka at the Lyric Opera of Chicago

“Grove’s cackling malevolence as Jezibaba is supported by a firmly knit tone from top to bottom of an imposingly wide range.”

“Grove brought to the stage a level of experience that showed in both her singing and acting. As one Chicago reviewer said, ‘She gives the witch such a playful wickedness as to make her somehow likable.'”

Jill Grove was enchanting as the witch, Jezibaba. She brought swagger to the role which was the perfect balance of comedy and malevolence. Grove elicited chuckles when blowing smoke rings and rolling her eyes at the naive water nymph, but her bloodthirsty side in the final act was jarring and creepy.

“…And mezzo Jill Grove all but stole the show with her bold, sassy and ultimately warm-hearted portrayal of the bearded lady, Baba the Turk. Baba has some of the most wildly virtuosic music in the opera, and Grove sang it with irresistible panache.”

Eugene Onegin at the Lyric Opera of Chicago

“It was luxury casting indeed to have Jill Grove portray Filipyevna. The wonderful mezzo’s big voice and roundly characterized performance as Tatiana’s nanny showed that there are indeed no small parts, just small singers. “