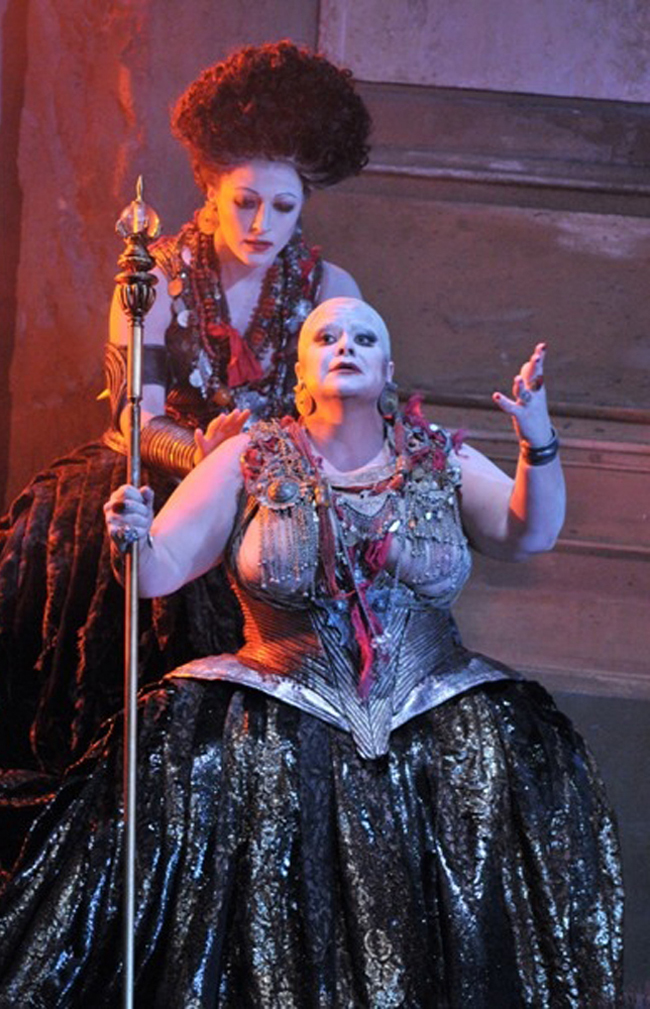 Praised by the Chicago Tribune for her “firmly knit tone from top to bottom of an imposingly wide range,” American mezzo-soprano Jill Grove makes returns to Houston Grand Opera as Ježibaba in Rusalka, Lyric Opera of Chicago as Margret in Wozzeck, and San Francisco Opera as Buryja in Jenůfa in the 2015-16 season. She also returns to Baba the Turk in The Rake’s Progress with Pittsburgh Opera and, in her home state of Texas, Verdi’s Requiem with the Lubbock Symphony Orchestra. Future engagements include returns to the Lyric Opera of Chicago and San Francisco Opera. Last season, she reprised Klytaemnestra in Elektra with Michigan Opera Theatre and Ježibaba in Rusalka in her with New Orleans Opera in. She also made her role and company debut with Utah Opera as Baba the Turk in The Rake’s Progress with Thierry Fischer conducting and sang Elgar’s The Kingdom at the Grand Park Music Festival. In addition, she returned to the Lyric Opera of Chicago for the world premiere of Wlad Marhulet’s The Property in performances throughout the Chicagoland area in the inaugural season of Lyric Unlimited, a new educational initiative that expands community engagement through artistic innovation.

Ms. Grove is a frequent guest at the Lyric Opera of Chicago, she has sung previous performances of Ježibaba in Rusalka and in past seasons, has joined the company as Klytaemnestra in Elektra, the Witch in Hansel und Gretel, Die Amme in Die Frau ohne Schatten, Amneris in Aida, Erda in Götterdämmerung, and Countess Geschwitz in Lulu. At the Metropolitan Opera, her performances include Erda in Götterdämmerung and Das Rheingold, Magdalene in Die Meistersinger von Nürnberg, Madelon in Andrea Chénier, Pantalis in Mefistofele, Emila in Otello, Mary in Die fliegende Holländer, Auntie in Peter Grimes, die Muschel in Die ägyptische Helena, and Cornelia in Giulio Cesare.

The mezzo’s other recent performances include Auntie in Peter Grimes with Canadian Opera Company; Jenny Reefer in Thompson’s The Mother of Us All conducted by Donald Runnicles at San Francisco Opera; Dame Quickly in Falstaff, Muschel in Die ägyptische Helena, Florence Pike in Albert Herring, Ursule in Béatrice et Bénédict, and Antonia’s Mother in Les contes d’Hoffmann with Santa Fe Opera; Erda in Siegfried, Nutrice in L’Incoronazione di Poppea, and Zita in Gianni Schicchi at Los Angeles Opera; Amneris in Aida in previous performances with Canadian Opera Company and New Orleans Opera; Ulrica in Un ballo in maschera with San Diego Opera; and the Sorceress in Dido and Aeneas with Philharmonia Baroque. In Europe, Ms. Grove has performed the role of Haushälterin in Die schweigsame Frau with Théâtre du Châtelet; the Deaconess in Szymanowski’s Krol Roger; Ulrica in Un ballo in maschera with Welsh National Opera and Teatro Carlo Felice; and Erda in Siegfried and the First Norn in Götterdämmerung with the Bayerische Staatsoper in Munich under the baton of Kent Nagano.A sought-after concert soloist, she has joined the Los Angeles Philharmonic, New York Philharmonic, National Symphony, Atlanta Symphony, Utah Symphony, Houston Symphony, and Santa Fe Symphony for Beethoven’s Symphony No. 9. She has sung Verdi’s Requiem with the Toronto Symphony under the baton of Sir Andrew Davis, Tucson Symphony, and Calgary Philharmonic; Mahler’s Symphony No. 3 with the Houston Symphony under the baton of Christoph Eschenbach and the Royal Concertgebouw Orchestra with Mariss Jansons conducting; Prokofiev’s Alexander Nevskywith the National Symphony under the baton of Hans Graf; Maria Aegyptiaca in Mahler’s Symphony No. 8 with the San Francisco Symphony under the baton of Michael Tilson Thomas and the Houston Symphony with Eschenbach, Bergen Philharmonic, and the Norddeutsche Rundfunk Sinfonieorchester under the baton of Eschenbach; Janáček’s Glagolitic Mass at the Grant Park Music Festival; Handel’s Messiah with the Toronto Symphony under the batons of Nicolas McGegan and Sir Andrew Davis and with the National Arts Centre Orchestra under the baton of Trevor Pinnock; Mahler’s Symphony No. 2 with the San Francisco Symphony conducted by Michael Tilson Thomas; Beethoven’s Missa Solemnis with the Minnesota Orchestra; Brahms’ Alto Rhapsody with the American Classical Orchestra; and Verdi’s Requiem with the Dallas Symphony conducted by Jaap van Zweden. Ms. Grove’s recordings include Ulrica on a Chandos recording of Verdi’s Un ballo in maschera, Auntie in Peter Grimes on the London Symphony Orchestra Live label with Sir Colin Davis and in a new production by John Doyle at the Metropolitan Opera (available on EMI DVD), Magdalene in Die Meistersinger von Nürnberg under the baton of James Levine and issued on DVD by Deutsche Grammophon, as well as the Muschel in Strauss’s Die ägyptische Helena with the American Symphony Orchestra on Teldec. As a member of the Houston Grand Opera Studio, she sang Tisbe in La cenerentola opposite Cecilia Bartoli which was released by Decca/London.She is the winner of the 2003 ARIA award, a 2001 Richard Tucker Foundation Career Grant, a 1999 George London Foundation Career Grant, a 1997 Sullivan Foundation Career Grant, a 1996 winner of the Metropolitan Opera National Council Auditions, a 1996 recipient of a Richard Tucker Foundation Study Grant, and a 1995 recipient of a Richard F. Gold Career Grant. She was a member of the Merola Program at San Francisco Opera and the Houston Grand Opera Studio and attended the Music Academy of the West, the New England Conservatory, and Stephen F. Austin State University. She received a Distinguished Alumna Award from the latter university in 2006.